Haven't been on here in a long time, not much a forum guy these days but some of you guys helped me out huge in the past so figured I'd try and give back a little! Maybe someone will find this useful somewhere along the way.

The very first issue I had when I bought a salvage 929 to use the motor ended up being the ECU that was dead. I found a couple other people had also had the same thing happen while I was looking into that. Basically the symptoms are it will fire the injectors (easily checked by looking down the throttle bodies while cranking) but won't produce spark on any coil. If this is happening there's a very good chance it is the ECU, assuming there is power to the common side of the coil and the ECU is grounded correctly (both easily checked if you have the wiring diagram). So, I bought another ECU and it ran fine for the next...seven years? (has it really been that long??

). Anyways a couple months ago it ate another one and I was back at square one.


So I was sort of stuck at a crossroads. Do I start a collection of expensive black bricks? Do I swap the motor just because the ECU's are garbage? A 954 ECU would be almost plug and play except all the plugs are different, and I don't know that they're any better. Do a stand alone and learn how to tune? Pretty much everything is expensive, risky, or a lot of work. Kind of disgusted with the whole thing so I just stuffed in a corner for a while.

Then one day scouring the internet I came a cross a site, in Russian of all things (thanks google translate), where a guy actually managed to de-pot and repair a CBR 600 ecu. So it was possible...incredibly tedious, but possible. 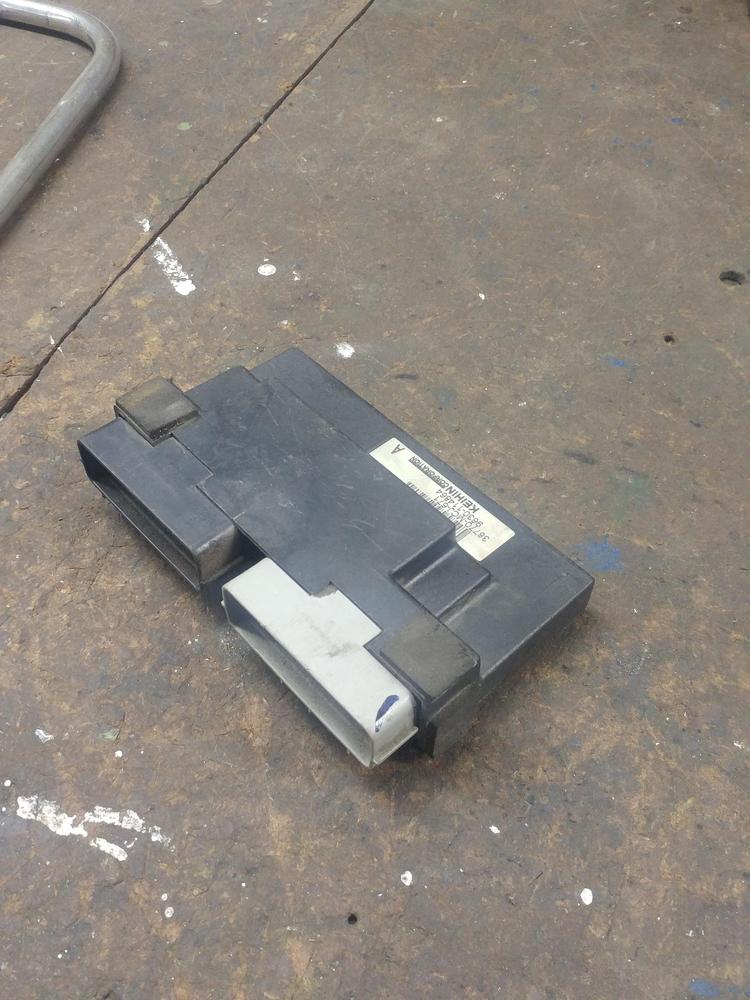 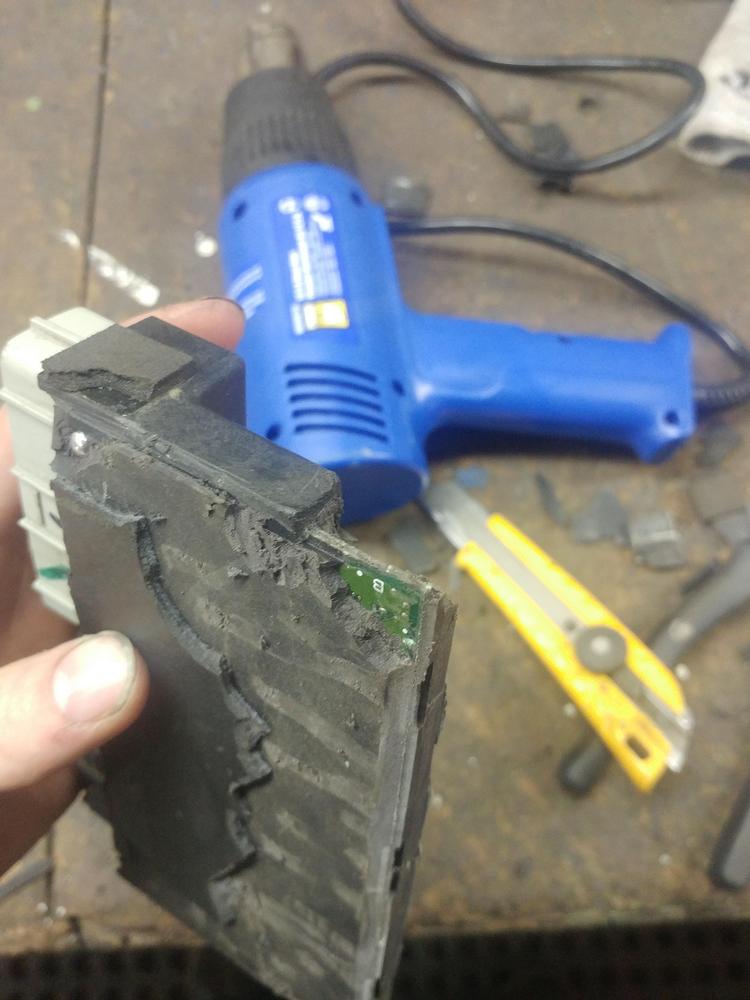 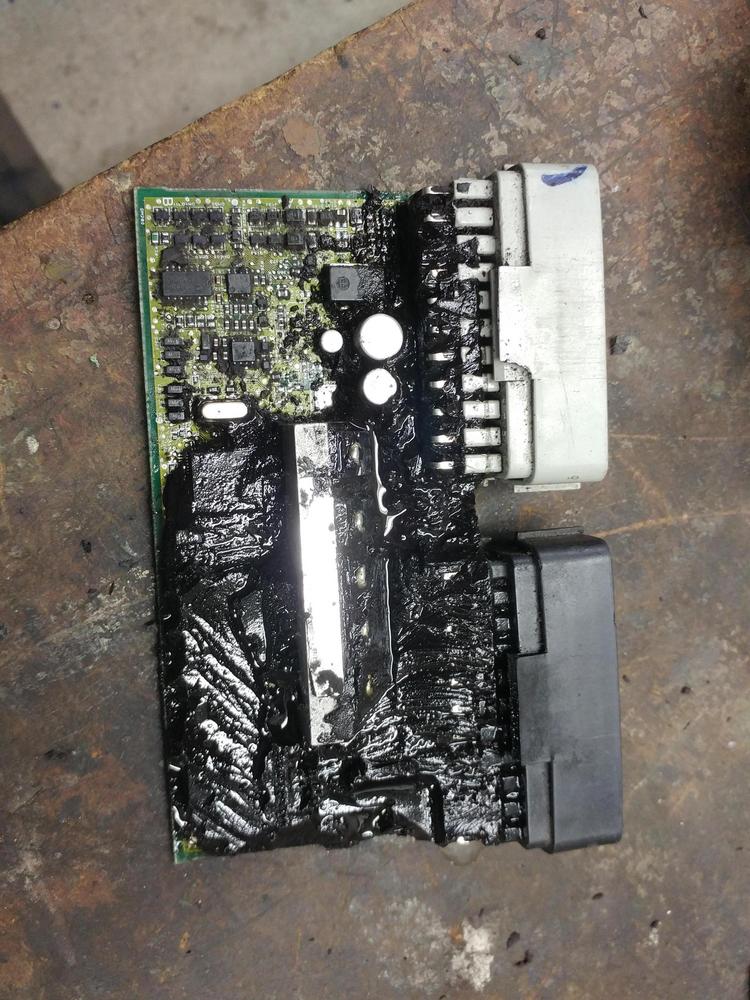 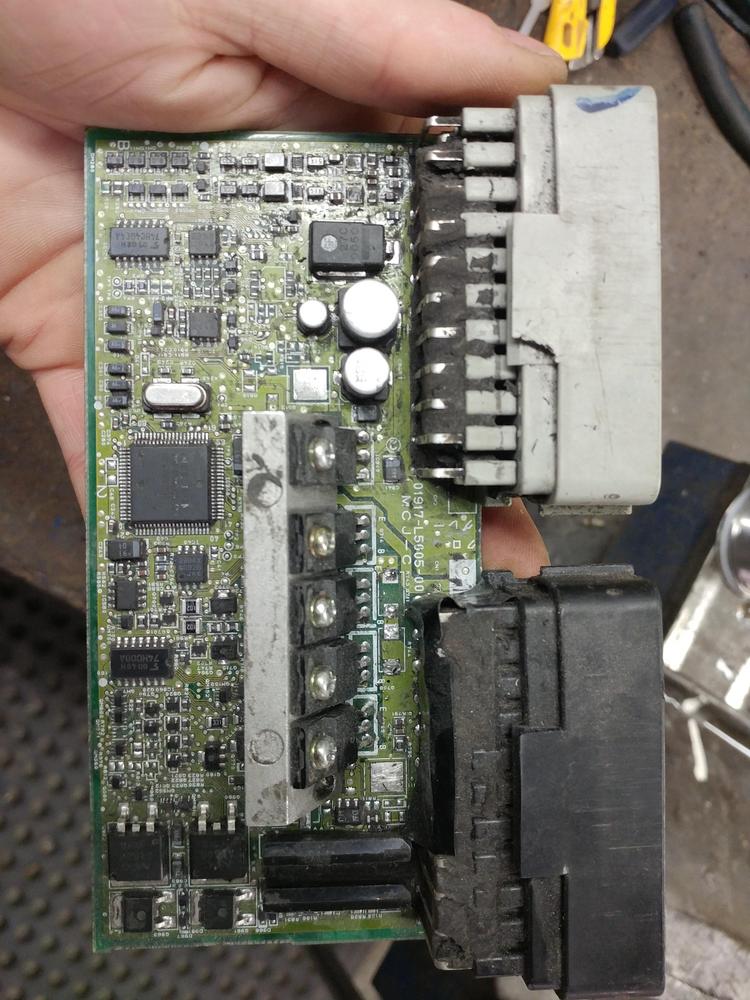 So the (sort of) short version: if you look in the last picture, to the right of the second and third transistor from the bottom, there are two SMD resistors missing. One of them went very high resistance and it was the same issue on both boards. The coil packs (coil on plug) are constant power, switched ground through the 4 transistors on the heat sink. These resistors are on the ground side of the transistor, and no ground = no spark. They are very low resistance (.25 ohm or so total) and are there to hold a little voltage on the ground side of the coil packs. The ECU monitors this voltage (should be less than .5 volt or so) and if you short a coil pack the voltage spikes, and the ecu shuts off the transistors rather than burning them up (high voltage at this area = very high amperage through the transistor). It appears that these resistors were not spec'd with enough power capacity and degrade over time (or they are just low quality).

Anyways I have two working ecu's again for $3 in resistors and wayyyyy too much time picking away at rubber. But at least now I know (and the second one only took an hour to fix because I knew where to dig). Here's half an hour of me rambling about it in case anyone else wants to try this fix. Skip to 15:23 if you just want to know where to dig to find gold.


I should also note the CBR 600 ecu on the Russian site appeared to have the exact same problem, though the translation doesn't quite come out right... but at any rate the board appears to be the same so everything above is likely still valid for the same gen 600 (I'd link to the page but I can't even find it anymore...)
machinehead, IanDoohan, BigdaddyPaz and 1 others like this.
srobinson is offline
Quote Quick Reply
post #2 of 4 Old 02-05-2019, 2:19 AM
MrPickwick
Supporting Member

Quote:
Originally Posted by Pduffy4848 View Post
Ive been having an issue I have a 2000 CBR 9 to 9 at idle it makes a whistling noise when I give it gas the noise goes away it seems to happen at a higher temperature cant seem to figure it out


Make sure your fast idle circuits are closing all the way. I've never heard them whistle but I suppose it's possible, and it would go away as soon as the butterflies are cracked. You can just push on the back of them that should be enough to get them to fully seat unless they are way out of whack. Other than that, airbox or exhaust leak but they would usually get worse under throttle
srobinson is offline
Quote Quick Reply