Joined Dec 24, 2013
·
42 Posts
I bought the bike about 3 weeks ago. The guy showed a video of it running I notice it had a flame out the rear of the exhaust. Figured it was something simple so I bought it. Well day I got it started it up still backfiring but started ran down the road let off throttle died but started back up. Got home killed it next day went to start it got a clunk type noise like its trying to start and turning over strong. So I call honda said I might need a battery worth a crap so I bought a Yuasa. Put it on no difference so today I took out spark plugs and they were wet so I cleaned them up check for fire to make sure since I had them out and put them back in. Still same no start just trying. So I pull them again and there soaked can smell fuel out of exhaust. At this point I google search and see FPR i checked mine and it was dripping so I got the one off my spare fuel rail I got when I bought the bike. (He had alot of oem parts came with bike) put it on and checked it again no leak but still same problem wont start just turn over im use to working on vehicles but this one has me stumped because it will run early in the morning ans want to start but its flooding it if doesn't start first try. . Any help would be appreciated.
C

Joined Dec 24, 2013
·
42 Posts
Well this morning I tried to start it and nothing just turns over. Check the spark plug wires to see what voltage I was getting when pushing button only getting about 9 volts to spark plug battery is reading 12. 04 volts. I keep getting a code 9 also but tested the IAT and got 2 ohms which according to what I read should be 1 to 4 ohms.. idk man I just smell fuel outrageously and bike not firing off hard enough to burn fuel off. Any suggestions

Joined Jan 9, 2011
·
7,455 Posts
I doubt that spare fpr you swapped in is any good if it's been sitting for any amount of time. They have a diaphragm that is vulnerable to sitting gas. It's one of the most common failures on our bikes. I'd buy a new one and see what happens, because everything you describe is what a bad fpr does. I've read a few cases where people tested theirs, no leak, but upon replacement with a brand new one, their problems went away.
You might need new plugs now too.

jondog9 said:
I doubt that spare fpr you swapped in is any good if it's been sitting for any amount of time. They have a diaphragm that is vulnerable to sitting gas. It's one of the most common failures on our bikes. I'd buy a new one and see what happens, because everything you describe is what a bad fpr does. I've read a few cases where people tested theirs, no leak, but upon replacement with a brand new one, their problems went away.
You might need new plugs now too.
Click to expand...

Good advice Jon, I second your post with a lus1:

Better to go with new on the FPR. Does it have a Power Commander?
C

Joined Dec 24, 2013
·
42 Posts
Ok changed the fpr with one for a 93 honda accord bike started right up still smell gas and slight backfire but at least its running. Now I have to change plugs and oil because oil smells like straight gas. Ill run it for a lil while then change oil again. Im still getting a code 9 though which might have to do with it running like crap.So I guess ill start looking up a IAT.

Ian yes it does have one but wasn't hooked up. Im not sure how it works so ive been hesitant to hook it up
C

Cajunracer900rr said:
Also how do I put a pic of my bike as my advatar next to my name?
Click to expand...

I'm not an FI guy so I can't really comment on the PC, but the avatar pic I can answer.

You have to become a "supporting member" by paying the $15. I paid just for that reason, twice.
C

Joined Dec 24, 2013
·
42 Posts
Lol I guess thats a good reason. Yeah i looked on dynojet website got all the downloads but dont quite understand all the functions. plus dont have a 9v battery hookup so gonna have to use my laptop outside. Thanks for all the info guys

Joined Jan 9, 2011
·
7,455 Posts
On a code 9, the ECM will assign an acceptable value and the bike will run pretty much normal. Try clearing the codes from the ECM's memory. You do that by jumping the service connector. That IAT code will most likely not come back. 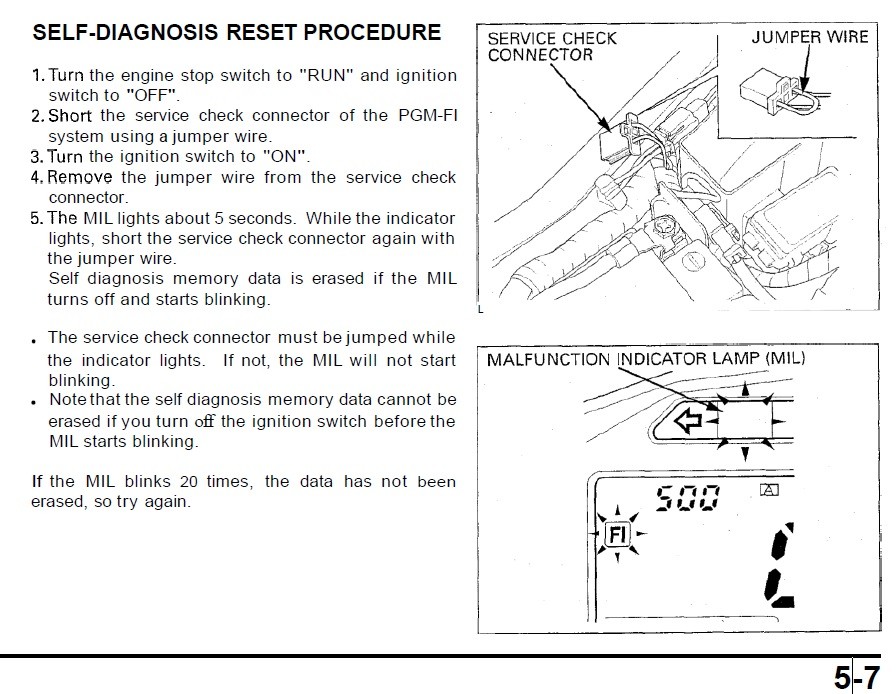 The instructions for mounting the PC are on DynoJet's website. Basically you just plug the PC's harness connector into the bikes main harness, and run the single wire to the negative post of the battery. Then hook up your laptop, having previously installed DynoJet's software onto it, turn the ignition key on, and you will get a screen that shows you all the fuel cells and what map is currently loaded onto it.
Research on DynoJet's website for the details, software, and free downloadable maps for your bike.
C

Joined Dec 24, 2013
·
42 Posts
Well update, I changed the oil and now bike wont start again. It fired up backfired again and died out and that's it, I give up it will sit in yard till I can take it to a mechanic or dealer ship. Ill give y'all a update on it once its fixed no sense in sinking money into it guessing on problems. Thanks everyone for the help was excited thinking I was gonna get to ride now I get to be depressed again

Joined Jun 28, 2013
·
8,051 Posts
It was hard to tell in the video, but was it bouncing off the limiter or was it the backfiring I was hearing? Obviously an oil change (all things considered) will have no effect on whether a bike starts and runs or not. Seems like a fuel issue to me. Map, pipe, assuming no exhaust valve, flapper mod, fouled plugs, FPR, will ALL have a direct impact on running and driveability. The fact that it's as stretched as it is could be (key word is could) a telltale sign that it was abused. I bet in its current condition if you cleaned the plugs again and let it run sensibly it would probably idle along nicely. I know That doesn't fix the problem, but even throwing a couple bucks at it still may be cheaper than having some 18 yo MMI grad do the same thing at $80 an hour.
C

Joined Dec 24, 2013
·
42 Posts
I hear that I talked to a guy yesterday that said he had a friend had the same problem but his was the stator so im gonna check it today and see if its bad. Hes saying that it very well might not be getting enough power or weak power to the plugs and causing it to flood and explains why it would just die. I have my multimeter so im just gonna check everything I can with it and make sure powers good ill change plugs just to be sure there good and everything else simple to change ill go all new. Its $75 a hour down here and I read some reviews on the honda places not good at all so im gonna find me a actual mechanic shop.
C

Joined Dec 24, 2013
·
42 Posts
It was backfiring not bouncing off the limiter. Forgot to answer that question oh and I cleaned plugs and let thwm dry out started bike and it idles up and just dies like wont even idle for any long period.
C

Cajunracer900rr said:
This is the article I found on the stator.
Click to expand...

I guess that could be true, especially with all the electronics on an FI bike. Here's a good charging system checklist courtesy of 954Kevin:

Joined Dec 24, 2013
·
42 Posts
I just check the stator and when I did the ground test I got a reading of .03 which is suppose to be zero so that tells me the stator is grounding out and is bad so there is another problem. Im ordering one today also ordering a new fuel pressure regulator adjustable. In a machinist back trade so im gonna manufacture something better than what they have so I can see on a indicator what the pressure is rather than the at cheap piece of crap they sell.
C

Joined Dec 24, 2013
·
42 Posts
Ricks Motorsport Electrics, Inc. How to test a mo…: here's the video I went off of on the first part where he check 1-2,2-3,3-1 everything was good but when he touches ground he gets zero. I get a reading of .03
1 - 20 of 45 Posts
Join the discussion
Continue with Facebook
Continue with Google
or sign up with email
Recommended Reading
Read More
Read More
About this Discussion
44 Replies
8 Participants
Last post:
rcoolb2002 Apr 21, 2015
Honda Motorcycles - FireBlades.org
A forum community dedicated to Honda Fireblade motorcycle owners and enthusiasts. Come join the discussion about performance, racing, modifications, classifieds, troubleshooting, maintenance, and more! Find conversations about your favorite CBR 900 or 1000 series RR models.
Full Forum Listing
Explore Our Forums
Off-Topic Honda FireBlade General Discussion Introductions For Sale
Popular Communities